Hey, everyone! Takahashi-sensei here. You might’ve been asking yourself every year, “How have things been going in Hollywood?”

The answer? It depends. Unless you’re a die-hard comic book or superhero fan looking forward to the next Marvel Cinematic Universe installment, or someone suffering a nostalgia addiction, things have been getting stale in Hollywood(only slightly). The movie industry has had cruel summers since 2014, and for awhile, it had been worsening, originality being overrun with numerous sequels that mostly flopped, and reboots of existing properties that upset a lot of loyal fans, as well. Zootopia, Disney’s 55th film in the primary cannon, was one of the only quality films released in 2016, and that’s just sad. However, because of its allegorical take on a future political environment that would be crafted by the beginning of 2017, it had people talking, and envisioning a life of social change, as much as a painting or essay could early on, giving the film potential to qualify for one of the most prestigious awards in the history of the creative industries: the Academy Awards. Not many films are guaranteed such a prize by the Academy of Motion Picture Arts and Sciences. Even films that had Golden Globe or BAFTA success can’t be promised a win. This is because there are only under 6,000 members rather than millions of the population of the United States in control of such a decision-making challenge. You can’t just bribe them with buckets of dollars just to be one of this elite crew. You can only be invited by lottery.

Ok, let’s go back in time a bit, the early 2000s. Ever read of those Sweepstakes in the magazines you read as kids, like, how you could win a motorcycle, MP3 players, or a PlayStation 2, which were really expensive at the time for someone your age, or even a full-fledged vacation to countries like Australia, or the Bahamas, which cost even more? “Many will enter, few will win.” reads such disclaimers at the bottom of the advert. Just as lots of kids send special postcards with hopes of being like their peers(or making them even more envious), just like lots of academics send letters hoping for their approval of being future students of Ivy League schools like Harvard or Stanford(for me, I’d probably never survive even a year at either, even if I tried.), only a select few will make it in. The same goes to Award Organizations, except, you have to be professional, or be nominated for 2 Oscars if a film you made with the potential of Oscar-bait makes it.

Ok, question answered. Twice. 2018 was actually an interesting year for American cinema. Though there were more superheroes and sequels nabbing some spots(though the My Hero Academia side-story arc Two Heroes deserved one for longer than it did; shame on you, Funimation, for not giving it a standard release, even though Sony could cover the costs!), and the #MeToo movement began to thrive within showbiz, many inspirational stories that the few had the courage to share(some of which being BlacKkKlansman, and Roma) began flooding the theaters and streaming services again. Another big favorite of the 2018-2019 movie season has been the biographical music drama, the story of everyone’s favorite British progressive rock band, Queen, Bohemian Rhapsody, which very much deserves an Oscar in any category, even though there’s been some trouble a-brewing with director Bryan Singer recently. Nonetheless, it’s an absolute classic of the decade that we can all appreciate.

Believe me, I had no idea that Bohemian Rhapsody would go on to become the highest grossing biopic yet, despite knowing that it would be popular(everyone’s listened to Queen before!). The first time my family tried to see it, tickets at the Chinook Centre Cineplex were sold out. The second time, we were lucky. The story of Freddie Mercury, Queen’s frontman, was very remarkable. Aside from being one of the greatest singers with a four-octave vocal range that put Michael Jackson’s to shame, he helped the band defy things the way they had been in the music industry in the early ’70s, even ushering the era of progressive rock and pop, bringing crowds from all across Europe and North America together, stomping and clapping in unison. Like MJ, he also became touted the “King of Pop”. After his death from AIDS, he became an icon for the LGBTQ community. 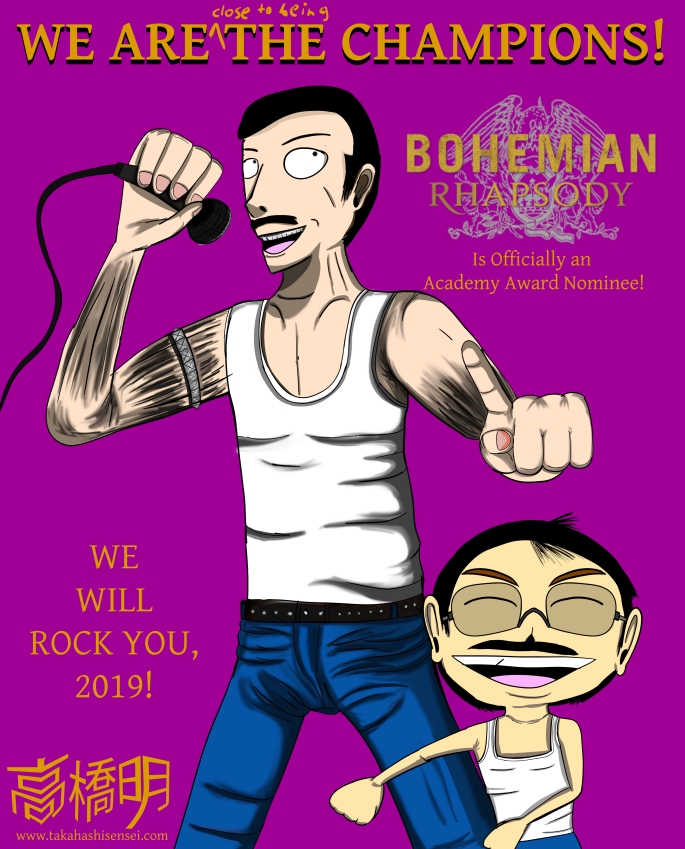 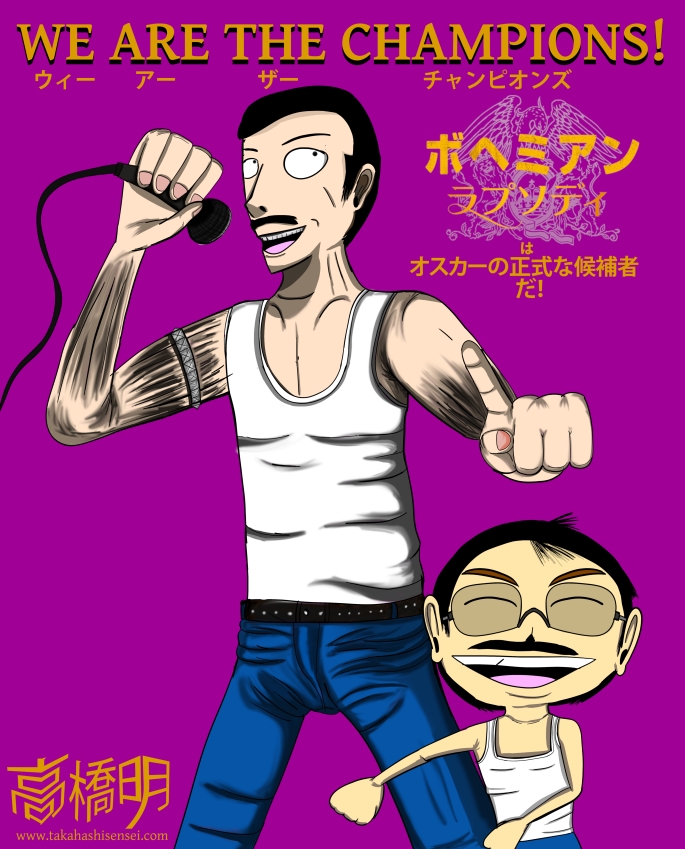 Rami Malek did a great job portraying the rude but amusing frontman, I can’t even tell which one is the real Freddie in the final climactic scene illustrating the events of Live Aid in 1985, which in reality, only made things worse for the crisis in Africa…but that’s another story.

Speaking of Disney, remember the trip I went on to Disneyland and Disney’s California Adventure in late August and early September last year? Though I had fun being an uncle-figure to my father’s girlfriend’s kids, even just for 6 days and 5 nights in the Orange County climate, and getting to taste the yucca extract-infused Slurpee recipe that’s not even sold at Canadian 7-Elevens? Well, the Pixar Short Film Festival attraction at California Adventure was where I first saw the latest Pixar short: Bao.(I didn’t bother going to the cinema to see another sequel as I was too busy campaigning for the 2026 Olympic Games bid.) What sets Bao apart from the other short subject films in Pixar’s 30-plus year history, is that…it’s written and directed by a woman…but she’s a Canadian, just like me!

Bao tells the story of a Chinese-Canadian mother who makes a Chinese pork dumpling that comes to life, and raises it as her son. As her life raising the dumpling child goes on, though the child is influenced by Canadian and foreign cultures and engages in social interactions with others, the mother becomes increasingly overprotective of the child, even as he grows into a young adult with a white Canadian girlfriend. The dumpling, which in reality is the mother’s real son(which surprised me joltingly, as the mother literally eats the dumpling boy out of sadness and frustration!), eventually rekindles their relationship with one another, and they make a meal together, which he shares with his Canadian friends. Of course, he will achieve independence one day, as much as I will.

Bao illustrates the relationship of food and family with a Chinese flair to it. In China, people usually prepare certain meals with love and care, just as they would to the same when it comes to pampering children. Eventually, what mothers sometimes forget is that they have to let their children choose the future they want to live in. But it’s not like they won’t be in touch again. In many cultures every time a festive holiday comes(Chinese New Year’s was just several weeks ago BTW), many families can reunite, even if they are living separate lives, though some are dieting! Domee Shii, my hat’s off to you!

And there you have it. If I were a member of the Academy, my votes for the Best would be placed on these 2 films. The industry is surely getting back in shape again for the better. I want it to improve so even my work, should I go beyond later on, has the chance of being nominated! I still understand that ideas creatives explore can still be a bit cringy at times. Paramount, I’ve got my eyes on you with what you’re doing with Sega’s spiny rodent later this year.

This is Takahashi-sensei signing out for the night. Happy Oscar Week, everyone! And you don’t have to be entitled to my opinions exclusively. Think for yourself!