The logo for the Olympic portion of the Games.

The logo for the Paralympic portion of the Games 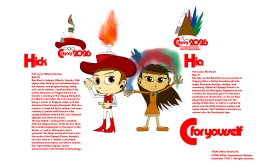 The profiles of Hick & Hia. 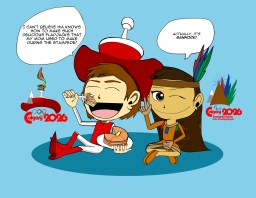 C for Yourself! Calgary will do its best to make 2026 the best Winter Olympiad yet!

A pro-Olympic message from Hick.

Hick meets up with an old friend from ’88. 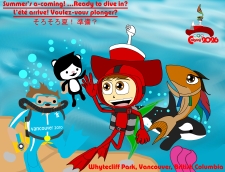 Hick & Hia take a dive in the depths of Vancouver’s pacific coast with Vancouver 2010’s Miga and Quatchi!

Ironically, Hick & Hia can legally own a home.

Snocross is something I personally wanna “C” at Calgary 2026! 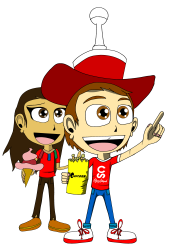 Hick & Hia at the Calgary Stampede!

Hia tells one of the traditional Aboriginal tales: “How the Turtle got its Shell”!

Hick & Hia take the reign of the Stampede Parade!

As a native of the city of Calgary, I was excited for Calgary’s preparations to be the host for the Olympic Winter Games of 2026, which led to the creation of these 2 human children, and the first since Lilehammer 1994’s Håkon and Kristin, Hick the cowboy, and Hia, a girl from the Blackfoot tribe! Hick would have represented the Olympics while Hia would have represented the Paralympics.

I was even an ambassador for YesCalgary2026, a grassroots organization in favor of having the games here in Calgary. My vision for the Winter Olympics for the 2nd time in Calgary was to make it even more memorable than our first from back in 1988. “C for Yourself” became the motto and hashtag for my promotion of the Olympic Spirit to everyone not just in Calgary, but in Canada as a whole.

Unfortunately, it was not meant to be as Calgarians have voted “No” in the plebiscite on whether or not the Olympics should come back to Calgary late that year. Either Cortina/Milan or Stockholm will fight over it in June 2019.